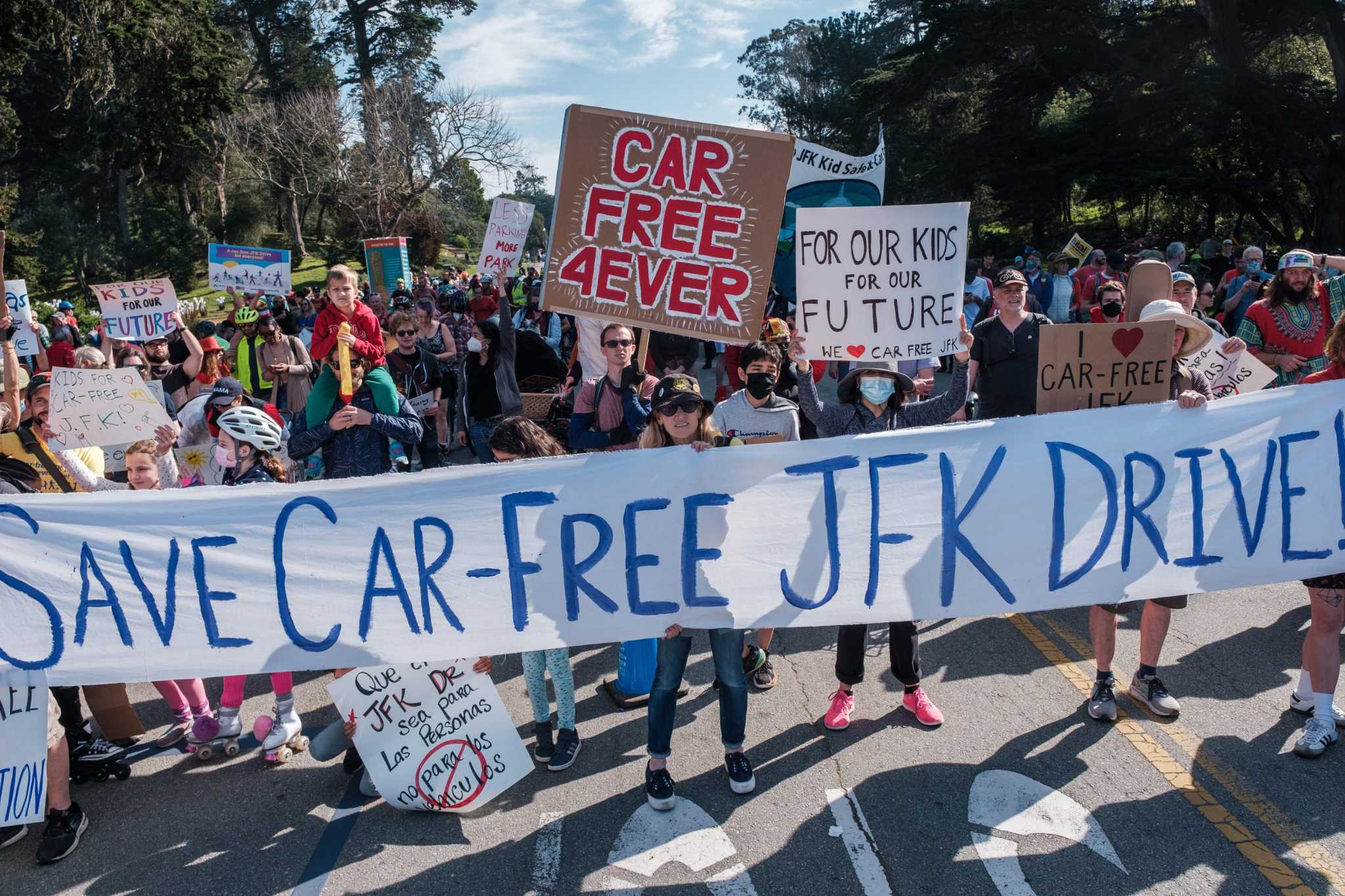 On an unusually warm and sunny Saturday morning in Golden Gate Park, San Franciscans were enjoying the green urban oasis. Friends holding cafes walked and talked, dogs ran alongside their owners, and children on tricycles followed their cycling parents. The occasional thump of a tennis ball hitting the ground on nearby courts could just be heard over the chirping of birds and chatting friends.

“Can you hear that from a car?” she says, sitting on the scooter she uses to get around the middle of JFK. “The car is the most intrusive bubble of our lives.”

Brownson was stopping at a table set up by Walk San Francisco, one of several groups holding a Saturday morning rally to rally support to keep the 1.5-mile stretch of road in the park car-free.

“There are still so many people who don’t even know it might be closing,” said Marta Lindsey, Walk SF’s communications director. “People are shocked when they hear that something so wonderful could disappear.”

In April 2020, JFK drive, along with Twin Peaks Blvd. and the Great Highway, among others, has been closed to vehicular traffic to give residents more space to exercise outdoors while maintaining social distancing during the pandemic. While the other two have since at least partially reopened to vehicles, JFK’s fate will be decided by the board of supervisors in March or April.

“It’s one of the last models in San Francisco without a car,” said Joaquin Giraldo-Laguna, who volunteered with Walk SF. He moved to the city during the pandemic, grateful for the closed roads that allowed him and his friends to explore. Now he comes to Golden Gate Park to rollerblade JFK at least once a week.

“I want it to be car-free forever,” he added.

By 11 a.m., hundreds of people had gathered in the park to support the cause, watching performances by roller skaters with the Church of 8 Wheels and Chinese lion dancers, blowing bubbles on bikes and writing Valentine’s Day cards for the park itself.

Supporters listened to speeches by several of the groups fighting to keep cars out, as well as District 8 Supervisor Rafael Mandelman, before marching on the closed stretch of roadway from the Conservatory of Flowers to 8th Avenue behind a large banner that read “SAVE JFK DRIVE WITHOUT A CAR.

Robin Pam, a volunteer with KidSafe SF, another group that advocates for car-free spaces, brought her two young children to the rally. She said when her daughter was born in March 2020, she spent much of her maternity leave walking around JFK – what she called a “bright spot” of the pandemic.

“It’s the best thing that’s happened for families in particular,” she said. “The pandemic has been so difficult for families with young children.”

She hopes the small section of the park will remain car-free, both so her children can play safely and in hopes that even the small reduction in driving will help San Francisco meet its climate goals.

“And there are lots of fun things for the kids!” his son Pax, 5, intervened.

Yet critics of the car-free space argue that it hampers accessibility to park attractions and makes it harder to get around the city and park by car.

The Department of Recreation and Parks is also working to improve the park’s accessibility in general, regardless of the board’s decision regarding JFK, SFMTA Director of Transportation Jeffrey Tumlin said. They are adding more disabled parking spaces than there were before the pandemic, working to improve the park’s shuttle service and ensure that all park locations have parking adjacent for people who need it, he said.

“I think there’s no greater sign that a street is loved than writing Valentine’s Day on it,” Tumlin said.

District 6 Supervisor – and Assembly District 17 candidate – Matt Haney, attending the rally, added that these changes, including improving access to the park by public transport, are important, but that keeping this section of the park free of traffic makes it more accessible to families and cyclists who want a safe environment.

“I’m disappointed it’s even a question,” he said. “It’s something our city should embrace.”

Prior to the street’s closure, its high traffic was accompanied by a number of collisions – 91 injury crashes on JFK Drive from 2014 through the 2020 closure. But since the closure, the Parks and Recreation Department said the park had seen an increase in visitor numbers.

Brownson said that before the pandemic, she never really enjoyed the park for what it was, usually driving around and driving straight to her destination. Now, with JFK closed, she’s seen more than ever.

“So far I’ve only seen eleven of the lakes. I didn’t know there were so many lakes,” she said. “There’s just endless things to explore here.”